Medieval Coventry has made a major contribution to a new exhibition on the history of Coventry’s built environment, including co-curator Dr Mark Webb and editor Amanda Kay.

The exhibition will open for 12 months from 20th July on the first floor of the newly re-opened Metropolis Gallery and Restaurant in the former Drapers building, Earl Street, CV1 5RU, next to the Herbert Art Gallery and Museum and opposite the City of Culture Festival Hub.

The exhibition examines Coventry’s unique contribution to British art, architecture and town planning, comparing medieval and modern under five themes: Movement,Enterprise, Culture, Resilience and Future. Few British cities have endured such periods of rapid growth, enterprise and destruction as Coventry. Yet the city has been at the forefront of British architecture and art, especially in the late medieval period and again in the 1950s and 60s.

There are many surviving examples of medieval and modern art and architecture in Coventry today, much of them of national significance, and the exhibition adds fresh insights based on the latest research, encouraging visitors to go out and explore the city on foot.

The displays will include innovative features including the first showing of the Virtual Reality model of medieval weavers working in Weavers’ House, Upper Spon Street, developed by the University of Warwick and Medieval Coventry. The exhibition has been supported by Coventry City of Culture Trust, Historic Coventry Trust and Coventry University. 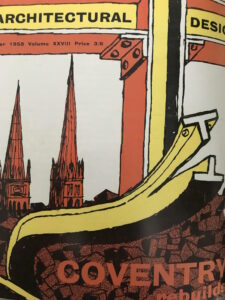